The Southeastern Pennsylvania Physics Olympic League is an unofficial self governing organization operated by volunteer high school physics teachers who devote their time and energy to a number of annual  Saturday morning physics related competitive events for the high school physics students whom they teach.

Sometime in the 1980s a small group of Southeastern Pennsylvania Association of Physics Teachers in the Villanova region of the Philadelphia suburbs got together and began a Saturday morning physics competition between local high school physics students. An outstanding mover and shaker among the Philadelphia area physics teachers at that time was Jim Nelson from Harriton High School. He may have been one of the founders of the League. Robert Swartz took over when Jim Nelson left Harriton. Harriton High School, along with Radnor High School may be the only original members of the league that still remain active to this day.

In the early 90s more enthusiastic physics teachers in the area became involved and expanded the number of schools participating and developed the competitive format that is still used today.

Some of the high schools involved in the early competitions were Upper Marion, Plymouth- Whitemarsh, Radnor, Harriton, Jenkintown, and Phoenixville.  Cinnaminson in New Jersey became the first and only New Jersey member joining sometime about 1990.

Some of the other high schools that have been members from time to time include Interboro, North Penn, Conestoga, Pennsbury,  Hallahan Catholic, and West Chester East. Currently Henderson High School is among one of the stable latter day members.

The banner that is passed on to the schools who win a meet was made by Penncrest High School under the leadership of physics teacher and Physics Olympic League coach Robert Malkovski sometime in the mid 90s.

The EEVC became involved in the early 90s providing awards for the electric vehicle event conducted at the last meet of each year.

The other criteria are finishing in the top half of the field and "excellence in engineering". 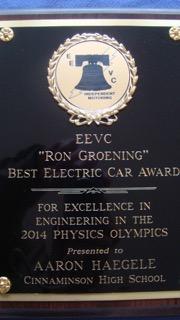