The Physics Olympics consist of three meets held throughout the school year in which regional high schools compete.  The schools competing this year were Interboro, Penncrest, Pennsbury, Radnor, Harriton, Cinnaminson and Henderson.

The Physics Olympics present a series of challenges, among them an electric vehicle competition, bridge building, and Physics Relay.  In this particular relay style event, students race to complete an athletic challenge while moving from one end of the gym to the other where they attempt to solve a physics word problem.  The students then return to where they began at the other end of the gym to enable the next player on their team to begin the next leg of the relay.  Examples of the athletic activities that must be completed before each problem solving attempt include completing a successful pass and catch of a football, two successful volleyball volleys between teammates, and successfully navigating an obstacle course while kicking a soccer ball.  A penalty task, such as a wheel barrel race or carrying a tennis ball on a plastic spoon is assigned for the trip back to the other end of the gym if the problem is not solved within two minutes.  The speed and accuracy in which both the physical challenge and the questions can be answered in each leg of the relay thus determine the winner of the event.

Another key event at the Physics Olympics is the Electric Vehicle Competition.  This competition starts off the morning schedule of events.  Students from each school rally and cheer behind their team's vehicle entries as they run to meet the demands of the course.   Always a creative challenge, this year's electric vehicle competition seemed particularly daunting: to successfully drive a model electric vehicle around a circular track.  The track was ringed on the inside and outside by a garden hose and gate timed using a track and field quality camera at the start and finish of the circular track.  Scoring was divided into two tiers.  Cars that completed one lap qualified for Tier 1 and were scored on elapsed time.  Those who could not complete a lap were scored on the distance travelled before they stopped or ran off the track and were placed in Tier 2.

Each school could enter more than one car and each car had five runs.  Scoring was based on the best time or longest distance for each car.

Eight vehicles from the various high schools entered the competition for the EEVC's Ron Groening Excellence in Engineering award, each with the EEVC logo proudly emblazoned on their vehicle.  Alan Arrison and Jim Natale of the EEVC along with two teachers worked the registration table to check in and evaluate each entry.

The circular navigation requirement of this year's competition introduced a need for design elements that would not only propel but also steer the vehicle around the track.   Four of the cars that entered the competition completed the timed part of the event by successfully navigating the full circle from the starting point to the finish.  The cars employed various clever mechanisms to accomplish this, among them an extended fender on the side of one of the vehicles that enabled it to glide along the outside barrier of the track as it completed the circle.

An interesting design aspect that Alan from the EEVC looked for in the cars but that was not directly employed by many of the designs was a "differential steering" that would have altered the steering angle based upon the relative rotational torque of the inner and outer wheels as the car moved around the track.  This would have prevented overshoot, skidding and an occasional 360 wipeout as the vehicles moved forward across the track floor.  One vehicle which had inner wheels smaller in diameter than the outer wheels may have attempted this design approach.  Although a true differential steering mechanism may have been difficult to incorporate in a model electric vehicle, increased tire traction and a stable speed around the track could have helped to compensate in the vehicles that navigated the full circular track.

Penncrest High School's electric vehicle was selected as the winner of the Ron Groening Excellence in Engineering Award.  Penncrest's vehicle exhibited several design features that enabled it to meet the challenge of the course.   It was a compact and heavy vehicle, with a heavy wood frame and two batteries balanced on either side simply for ballast in addition to the 9 volt battery that powered the car.  The heavy weight, combined with small rubber wheels, increased the traction of the car thereby preventing slipping as the car moved around the track on the slippery gym floor.

Solid gearing coupled the motor to the vehicle axle.  The car featured a "pit adjustable" steering design, with two screws in the front of the vehicle that could be loosened and tightened to adjust the steering angle of the axle for an optimum fixed turning radius through the circular course.  It had a Styrofoam bumper in the front and relatively tiny wheels that were smaller than the height of the garden hose that ringed the track.  This prevented the car from "jumping the track" should too much momentum be gained in the turn.  Although not a criterion for winning the EEVC award, their vehicle  sported the fastest time in the event.  The students added creative cosmetic touches to the vehicle that included a copyright by Tessamir Industries and a "How's my driving?" tag line on the rear bumper.  It also had a unique slick pushbutton switch for ease of starting mounted on the top.

This winning vehicle was put together by a team of students at Penncrest High School with the support of their Physics teachers Jim Ciccarrelli and Anthony Lombardo.  Students Mark Dresden, Ben Knower and Nathan Dole enthusiastically accepted the EEVC award for the vehicle they had built and raced in the competition.  Mark Dresden repeatedly credited the group effort for the win, including some students who could not make it to the event that day. The students and their teacher JIm Ciccarelli said that they had referred to themselves as the "Physics Goon Squad" as they were designing and building their vehicle.  With a nick name that might just as easily be overheard on a football gridiron, the "Physics Goon Squad" left the gym with the EEVC Ron Groening Excellence in Engineering award and other trophies from the day's competitions triumphantly in hand. 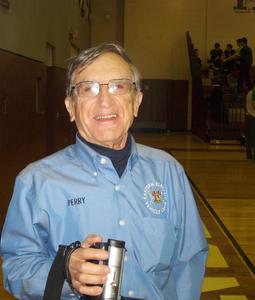 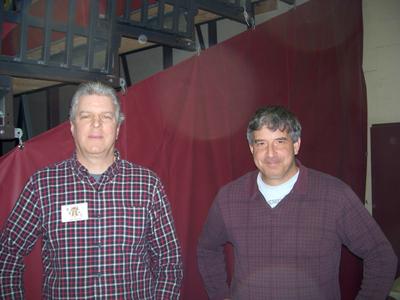 Oliver Perry behind the camera. 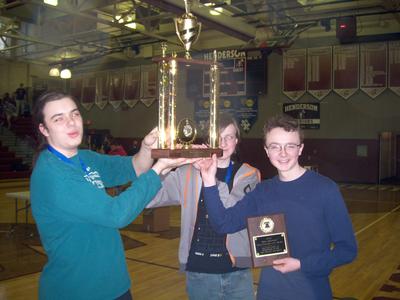 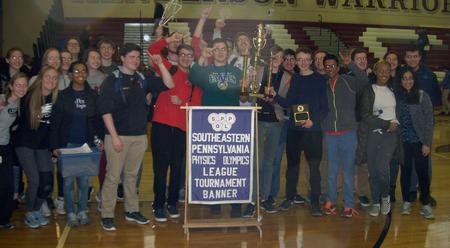